As an animator, coder, illustrator and designer, Robby Leonardi found the perfect way to showcase his many, many talents by making his resume a video game.

The Super Mario inspired side-scroller is creative ingenuity at its best. By hitting the up and down arrow keys you can run, jump and swim through Leonardi’s work experience, skills, interests and published work.

It’s a brilliant showcase of the designer’s artistic flair, technical skills and imagination. And best of all, it’s fun to play!

Strictly speaking this isn’t a resume, it’s a cover letter. But it’s a damn good one and a fine example of how mighty the pen can be.

In 1934, New York copywriter Robert Pirosh was able to make the successful leap from advertising to screenwriting after sending this letter to studio execs in Hollywood.

As a virtual unknown in tinsel town, Pirosh’s letter landed him three interviews and eventually a job as a junior writer at MGM.

Several years later he went on to win an Oscar for best original screenplay, as well as a Golden Globe. 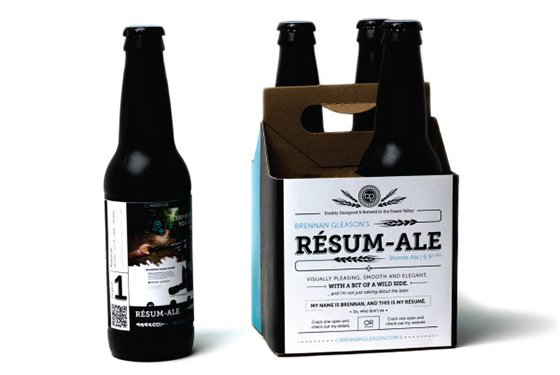 When design graduate Brennan Gleason finished his degree and faced the looming prospect of being unemployed, he turned to alcohol.

That’s right; he combined his design talents with his love for home-brew, delivering the ‘Resume-ale’ to prospective employees.

The innovative and tasty tactic won him three job offers in a few short weeks. Brennan now works for a digital marketing company that greatly enjoys his creative energy – and his ale.

This is a stellar example of ‘know your audience’.

When senior copywriter, Alec Brownstein, realised he was googling himself on an ‘embarrassingly frequent’ basis, he also realised he couldn’t be the only one.

‘Everybody googles themselves,’ Brownstein told Mashable.

‘Even if they don’t admit it. I wanted to invade that secret, egotistical moment when [the creative directors I admired] were most vulnerable.’

Brownstein seized the chance to take advantage of egosurfing, and placed bids on the names of all the creative directors he admired on Google Adwords.

The idea was simple: when the directors googled themselves, a link to Brownstein’s work would appear at the top of the page along with the following message:

Over the next few months Brownstein received calls from all but one of the names he had targeted.

He ended up landing a job with New York ad agency Young & Rubicam, and the stunt has seen Brownstein receive awards in the self-promotion category of two major advertising awards, The One Show and The Clios.

Not bad for a campaign that cost $6. 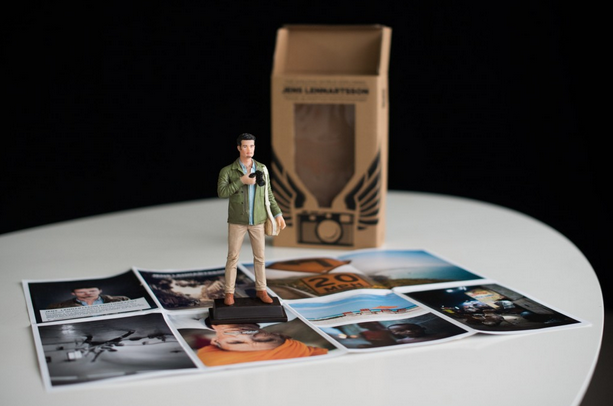 Photographer Jens Lennartsson knew that if he was going to stand out from the crowd, he ‘needed more than a paper folder.’

So the Swedish freelancer decided to put his marketing budget to better use. Rather than throwing cash away on designing the ‘perfect’ portfolio, he produced 400 action figures of himself!

‘If you’ve ever been in touch with an art director, art buyer or owner of an ad agency, you’ll know that they have a zillion things to do and as many people to meet.’ Lennartsson writes on his blog.

‘Unless you make an epic impression, you’ll be forgotten.’

The GI Joe inspired figures (GI Jens) represents Lennartsson’s belief that ‘photography is all about the raw and natural lifestyle and travel photography, without too much gear and Photoshop’. 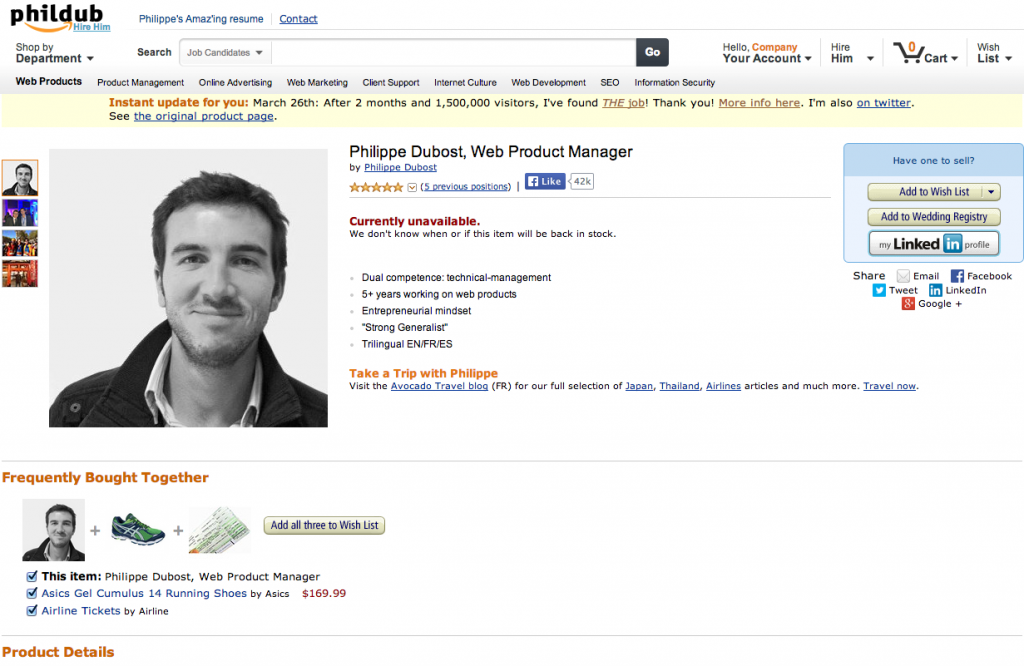 There have been a number of resumes that mimic digital platforms like Facebook and Twitter, but Philippe Dubost’s faux-Amazon resume is by far the most detailed and effective of them all.

As a web product manager, there’s no better way for Dubost to show off his robust marketing skills and get his product (himself) out there.

It only took Dubost two months to garner an impressive online reaction that consisted of: 1.5 million hits, 800 LinkedIn connection requests and 1,100 emails of interest.

He’s since had a lot of offers and eventually landed his dream job – a gig at leading discovery platform Birchbox.

‘They’re a fantastic company with super smart people, an awesome culture, tremendous growth, and I couldn’t be happier about joining them,’ Dubost writes on his Tumblr. 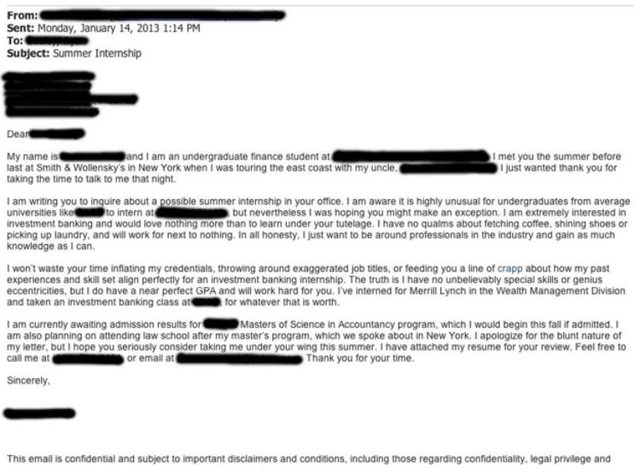 It’s easy to dismiss these innovative resumes as only being appropriate for creative industries. After all, we touted them as being ‘creative’ resumes in our headline.

But remember, creativity is much more than fancy design and crafty copy. At the end of the day it’s about approaching things differently and having the guts to try something new.

This brutally honest cover letter to a Wall Street executive is exactly that: creative, strategic and innovative.

The email, penned by finance student Matthew Ross in 2013, is refreshingly direct and clearly hit a chord within the brown-nosing world of investment banking.

‘I was reading through some cover letters, and they were all fluff to me, everyone was embellishing and lying,’ Ross told website News. ‘I wanted to take a fresh approach, tell the truth, and be brutally honest.’

Within half an hour of hitting the send button, Ross was fielding calls from prospective employers. Social media caught wind and the email went viral in a matter of days.

Hailed by many Wall Street bosses as ‘the best cover letter ever’, the email secured Ross the internship he was after at firm Duff & Phelps.

To this day, Ross continues to work at the firm as a full-time investment banking analyst. 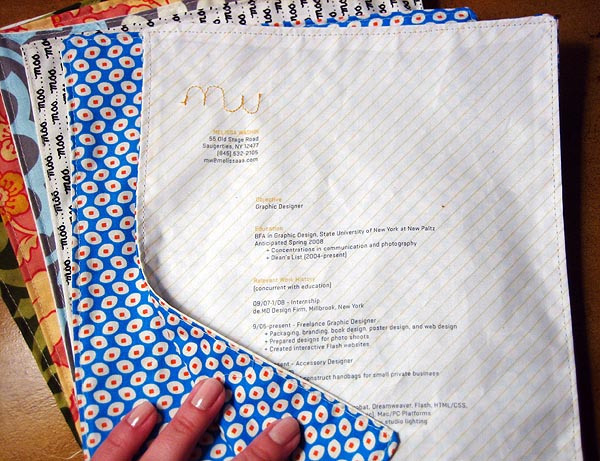 The fashion industry is renown for being highly competitive and notoriously cutthroat.

So when Melissa Washin was in her final year of studying fashion, she knew she needed to do something different to get a foot in the door.

‘I wanted to really represent not only my design skills, but my affection for sewing handmade elements in my design work,’ Washin explains.

And it worked. She got the first job she applied for straight out of college and is now a product designer at Esty. 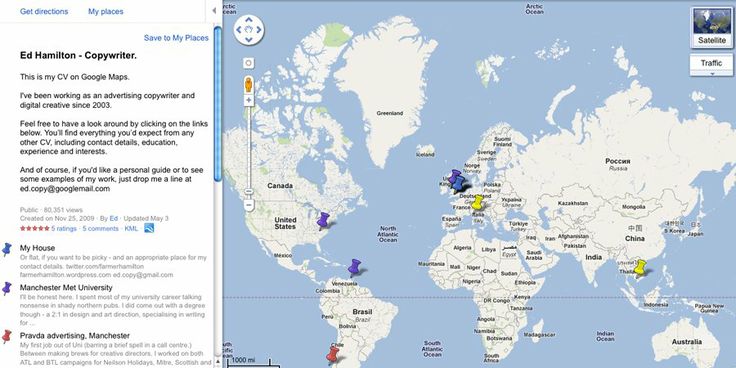 It’s the type of CV that’ll make the globetrotters amongst you drool.

Ed Hamilton’s Google Maps resume is a fun and highly inventive way of showcasing the diversity of the copywriter’s work and travels.

Using the ‘My Maps’ function, Hamilton built his resume in 2009 as a simple and interactive means for employers to get to know him better.

With an impressive string of cities under his belt, and personal flourishes here and there, it’s clear Hamilton is an experienced writer.

‘No easy task when [the team] were prohibited by the government from using the words ‘condom’, ‘sex’ or ‘HIV’,’ Hamilton writes on the Tobago pin.

Between 2007 and 2009, the geographical resume also shows he worked in Hoxton Square, dubbed by Hamilton as the ‘spiritual home of the hipster moustache and fixed-wheel bicycle.’

It’s the resume with a distinct voice. Literally.

Art director, Victor Petit, was struggling to find an internship when he came up with this inventive way to pitch to agencies.

‘I realised during my previous job search that getting an interview at a communication agency is the hardest part of the process,’ Petit told Mashable.

So Petit created a resume that would ‘enable [him] to express [himself] vocally as soon as they read the paper version.’

The idea was simple enough. Employers scanned the QR code, lay their phones down on the placeholder and it would become Petit’s talking mouth.

Goes to show sometimes it does pay to mouth off.

Viv is a writer who enjoys researching and writing about creativity, how the human mind works, and neuro processes. She values creativity above all else and admires people who pursue their career dreams, no matter the sacrifice. In her spare time, she binges on HBO shows and epic fantasy novels.